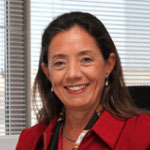 Barbara Adams is recognized as an accomplished Pennsylvania leader with more than 30 years of experience in the law, finance, government and public service.  Ms. Adams recently completed over five years of service as General Counsel for the Commonwealth of Pennsylvania and in August 2011, became General Counsel to the Philadelphia Housing Authority.

For almost three decades, Ms. Adams worked at the firm of Duane Morris, LLP, an international law firm with its world headquarters in Philadelphia.  Starting at Duane Morris as a summer intern, Ms. Adams achieved Partner, was a member of the Partners’ Board, and headed the firm’s Finance Practice.  She focused her practice in the areas of public finance, derivative products, credit enhancements, escrow restructurings, affordable housing and community development, transportation and infrastructure funding, state and local government law, energy law and political campaign finance law.

Given her expertise, Ms. Adams was a natural choice when Pennsylvania Governor Ed Rendell needed a new General Counsel to serve his Administration, and to head the legal team supporting the Commonwealth’s Executive Branch.  Ms. Adams oversaw the work of a 500-lawyer department, and had an important role in some of the most significant milestones in Pennsylvania over the last eight years.  Among her accomplishments: she led the legal team to develop a public/private partnership to lease the Pennsylvania Turnpike; she negotiated lease rights for natural gas and oil drilling on state lands; and she crafted the process resulting in the consensus to create a new Right To Know law in Pennsylvania.

As the General Counsel of the Philadelphia Housing Authority, Ms. Adams is charged with rebuilding the internal legal function for the Authority and assisting in implementing the recovery plan so that the Authority can terminate the existing receivership by the U.S. Department of Housing and Urban Development and be returned to local control.

In addition to her public service, Ms. Adams has demonstrated her commitment to the betterment of the community through her volunteer leadership in organization such as the Peoples’ Emergency Center, the Reading Terminal Market Corporation, The Nuclear World Project and the Philadelphia Energy Authority, to name just a few.

Ms. Adams is a graduate of the Temple University School of Law and earned her undergraduate degree from Smith College.

Back to Board & Staff