“Philadelphia is ramping up our efforts to fight climate change and convert to renewable energy,” said Mayor Jim Kenney. “We know that climate change is already impacting our city, neighborhoods like Hunting Park are hotter than others, which can have a negative impact on the health and well-being of residents. That’s why we are committed to upholding the Paris agreement and to transitioning to 100 percent clean energy as part of our long-term goal  to reduce citywide carbon emissions 80 percent by 2050.”

“I’m pleased to support these bill signings today with the Mayor, strengthening the city’s commitment to energy savings, a cleaner environment and a healthier economy,” said Council President Darrell L. Clarke. “This legislation mirrors our work with the Philadelphia Energy Campaign, which we created to lower utility costs for city government, small businesses and residents – and create 10,000 jobs in clean energy by 2026. We’ve created nearly 1,000 jobs in just two years. We’re fighting poverty, improving learning environments for children, and fighting climate change. Today’s bill signings are another step in the right direction towards a cleaner, more energy-efficient city.”

“Last year, Pennsylvania became the 36th state to adopt C-PACE, thanks to the support of Governor Wolf and the General Assembly,” said Councilmember Derek Green. “Here in Philadelphia, just as we are moving the needle dramatically on solar projects for our residents and helping them to lower their utility bills via the success of programs like Solarize Philly, we are now able to do the same for our commercial and industrial building owners. I’m proud to be a part of what will be, without a doubt, a revolutionary and game-changing initiative for our climate, as well as our economy.”

Additionally, the Mayor signed a bill to create Philadelphia’s first solar rebate program. The rebate provides an incentive payment of $0.20 per watt for residential solar projects and $0.10 per watt for commercial projects, with an initial allocation of $500,000. The City will start accepting rebate applications in January 2020, and any project installed after July 1, 2019 will be eligible to apply. The rebates will be allocated on a first-come first-serve basis, though the legislation allows for prioritization of low income households to make sure that all Philadelphia residents are able to receive the benefits of going solar.

“Through the Philly Solar Rebate Program, Philadelphia businesses and residents will be eligible to receive locally-sponsored incentives for installation of solar, which helps to fill the gap left by the expiring Federal tax credit,” said Councilmember Blondell Reynolds-Brown. “This program will enable our City to move strategically in the direction toward a cleaner and greener Philadelphia. The Philadelphia Energy Campaign is successfully creating jobs, supporting small businesses, and reducing energy bills in thousands of Philadelphia homes. The rebate program will now align Philadelphia with other major cities, such as Austin, Charlotte, Kansas City, and Seattle, all of whom are on the cutting-edge and taking the requisite steps to implement a clean energy vision for their residents.”

The City has made tremendous strides in promoting solar, administering the nation’s largest single solarize initiative, Solarize Philly, committing to buy 22 percent of municipal buildings’ electricity from a 70 megawatt solar farm, and achieving SolSmart Gold status from the U.S. Department of Energy.

However, in order to meet the City’s climate goals, about 80 percent of Philadelphia’s suitable rooftop space will need to be producing clean electricity for residents and businesses. The solar rebate program will provide a direct financial incentive to residents and businesses to help them install solar panels on their homes and buildings. This rebate comes at a time when the federal solar investment tax credit will begin to step down starting in 2020 and before the September 30 deadline for the Solarize Philly group buying program, making 2019 the year to go solar in Philadelphia. All Philadelphia homeowners and businesses are encouraged to go to www.solarizephilly.org to sign up for a free solar assessment.

The Philadelphia Energy Campaign is a City initiative run by the Philadelphia Energy Authority (PEA) to create 10,000 jobs through clean energy projects by 2026. The rebate and C-PACE are expected to drive job creation in line with this goal. PEA administers Bright Solar Futures to train Philadelphia’s young people for jobs in the solar industry and establish the nation’s first Clean Energy Program of Study for high school students. The fourth class of high school trainees will graduate on Friday.

For more information on the graduation and other Philadelphia Solar Week events, visit solarizephilly.org/events.

Photos: Click here for solar photos approved for media use 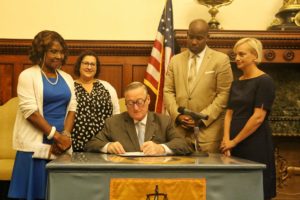 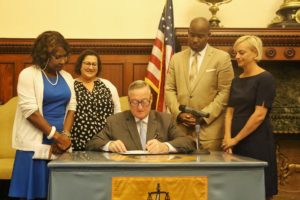 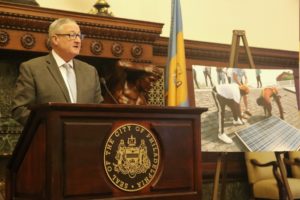